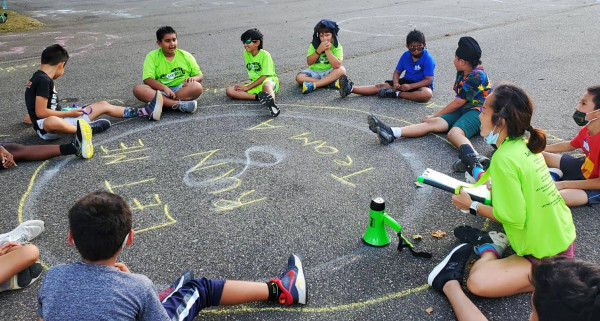 Starting any program from the ground up is not easy, but starting after a pandemic -- which shut down school-based activities -- is an even bigger challenge. Angela Wan was ready for that challenge, as a parent volunteer who loves to organize other parents, and get the ball rolling for kids in the demographically diverse Herricks Union Free School District (HUFSD) on Long Island, New York.

“She is a force!” explained Let Me Run’s Executive Director Emily Battle -- and she's right. Wan’s undergraduate work in societal studies and Duke Law degree prepared her for the regulatory challenges of getting the program passed in her tightly-knit district with 3 elementary schools, but it was her passion as a parent of two that motivated her to follow through.

“No other program builds in practical learning about health, nutrition, and teamwork like this one,” she says. Teachers can talk about social and emotional health in a classroom, but it’s hard to help kids practice it on a playground, she explains. Parents don’t often recognize issues until they’ve snowballed. That’s where Let Me Run steps in to tie it all together, says Wan. “I think the very professionally-written curriculum that blends it all together in a very practical way attracted parents.”

Wan learned about Let Me Run when her young son helped a buddy train for Girls on the Run. She loved the program so much she looked for something similar for boys, who she notices are often pushed into boxes of “athletic” or “not athletic'' -- without any outlets for the vast “middle” like her own son.

“He’s not going to be an all-star -- he’s a kid in the middle who isn't a superstar or super needy,” she says, “but he needs attention too.” And so many “boys in the middle” do.