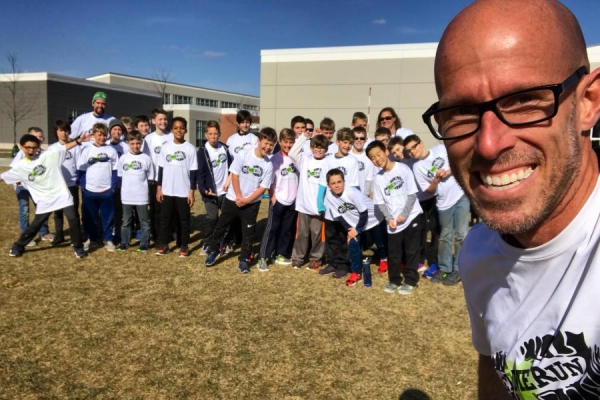 This coach is running his 73rd marathon for Let Me Run

Scott VanLoo is an avid marathoner and a Let Me Run coach in the Kalamazoo region. “LMR has been a huge part of my past 3 years, as I help head coach the Mattawan team here in Michigan,” Scott explains. “The first 5k race we completed was the day after I was let go from my job of 10+ years. I can honestly say that seeing the LMR boys that next day and reflecting on the Let Me Run program, I was able to move on with my professional career and not stress about the what ifs.”

Scott is an advocate of the Let Me Run program because he’s seen “countless positive changes in both the boys and the coaches that participate — from stepping outside of one’s comfort zone, to participating in programs that the boys’ parents would have never thought of, to turning their school academics around and achieving the high grades.”

Scott has even seen transformations in himself after becoming a Let Me Run coach. “Let Me Run has opened doors of being more active in my community, building friendships with several new families, and having the opportunity of bringing my passion (running) to the school for the kids.”

He’s also learned Let Me Run lessons, like emotional health, right alongside the boys. Scott said, “I’ve learned that it’s okay to show emotions. It’s okay to be sad. It’s okay to reach out to someone and discuss things.”

Scott was excited for the opportunity to join Let Me Run’s team of 10 charity runners in the 2018 TCS New York City Marathon, which will be his 73rd marathon. “I have run many marathons to date, and while I tackle each one with a purpose, I’ve found over the years that I’d wish my race was more than just about me,” Scott said. “I’m honored to join the NYC LMR team to help spotlight and raise awareness about Let Me Run.”

Over the course of his training, Scott’s goal is to raise $5,000 for Let Me Run, which will support the program’s growth in the Kalamazoo, MI region. To help Scott reach his goal, visit his Crowdrise page.