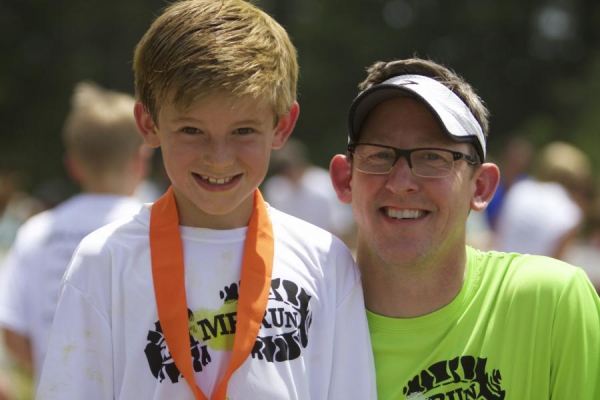 Let Me Run's Board Chair models physical and emotional health for his sons.

In 2009, Joel Thomas became one of Let Me Run’s first coaches. Joel says, “I initially got involved with Let Me Run as a coach because I am a runner and my son was the right age to join a team, but I quickly learned that Let Me Run is about so much more than the running. Let Me Run gives these boys a safe, encouraging environment to learn, grow and express themselves, all while achieving something that they may not have thought possible.”

Joel is now Let Me Run’s Board Chair, and he works to support the program's continued growth. Seeing Let Me Run grow from serving 14 boys on the first team to over 20,000 boys across the country, Joel says, “my hope is that these boys will remember the lessons they learned in Let Me Run and that this will guide them when they are faced with difficulties. I hope they will understand that many of the problems they will face can be solved by talking openly about what’s on their minds.”

Joel has taken Let Me Run’s emotional health lessons to heart. He explains, “There have been many times in my life where I have felt scared, uncertain, depressed and angry, and I often felt that I had to figure these things out on my own — that it was my problem to solve and not really shareable with friends or family. And that wasn’t because people weren’t willing to listen, but more of a behavior I modeled from the other men in my life. After learning more about the long-term impact of these behaviors, I don’t want my sons, or any of our boys today to feel like they are alone in dealing with their hardships, but instead that it is okay to work through these things with the help of others and doing so doesn’t make them weaker or less of a man.“

On top of building healthy relationships, Joel wants Let Me Run boys to feel the sense of accomplishment that comes from running a race. “I hope Let Me Run boys will always remember the joy of crossing the finish line and realize that anything can be accomplished when they work hard to achieve it.”

On November 4th, Joel plans to cross his own finish line — the 2018 TCS New York City Marathon finish line. “Since I ran my first marathon 10 years ago, I’ve wanted to run the NYC Marathon,” Joel explains, “and I thought what better way to achieve this goal than by supporting an organization I love. I am a longtime supporter of Let Me Run and through my time on the board, I know there is a lot of work to do to continue to grow the program and spread the word and raise funds for Let Me Run.”

On his way to the marathon, Joel’s goal is to raise $5,000 for Let Me Run boys. To help Joel achieve his goal, visit his Crowdrise page.